Life at Camp Black and Bloom……

I’m not sure if we ever tied down a name for our ice sheet home for summer 2016. We are close to the S6 weather station and a couple of km further onto the ice sheet from the Dark Snow camp of 2014. In fact in the evening we can see a flashing light at S6 and some people have got photos of the twin masts at the site (one for weather and one for comms?). The thinking is that at this time of the day the angle of the sun is in the sweet spot to reflect off the wind vane?? There is no pattern to the flash and is white, regular and red might indicate some warning function, with power being something at a premium out here it seems a little extravagant to have a light so we’re happy with the wind vane idea (credit to Joe for this theory). 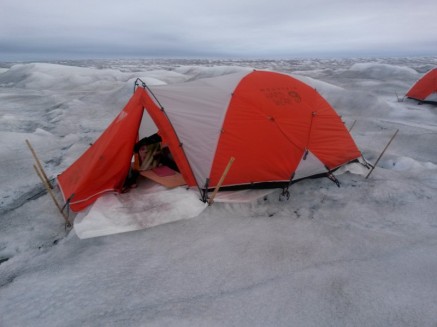 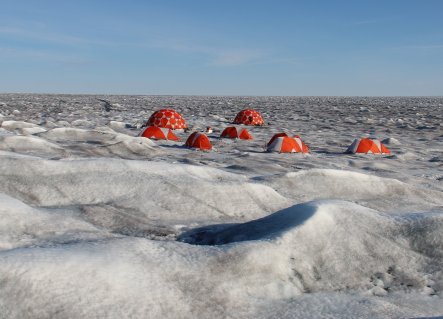 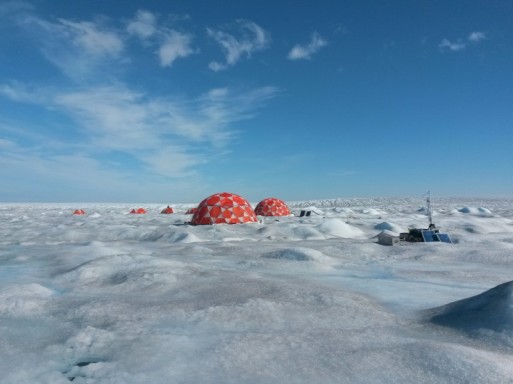 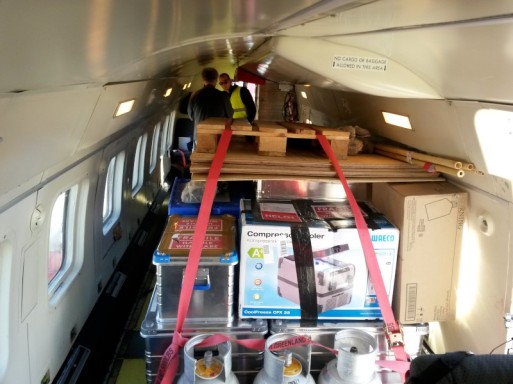 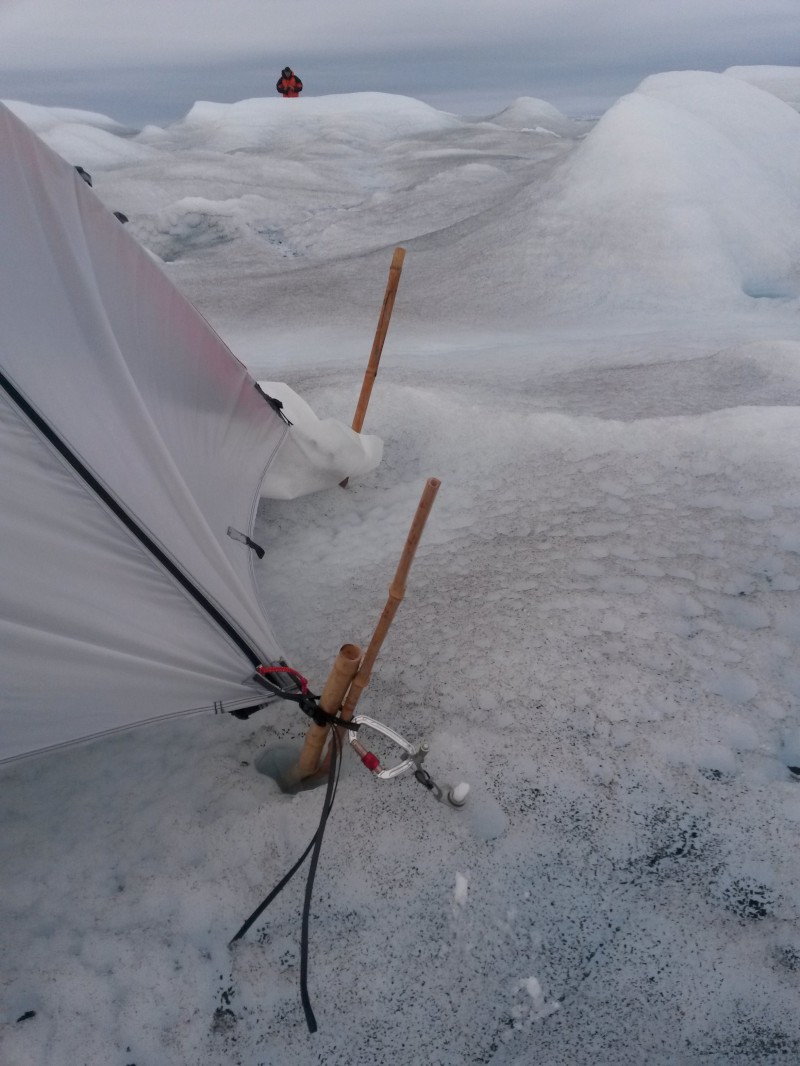 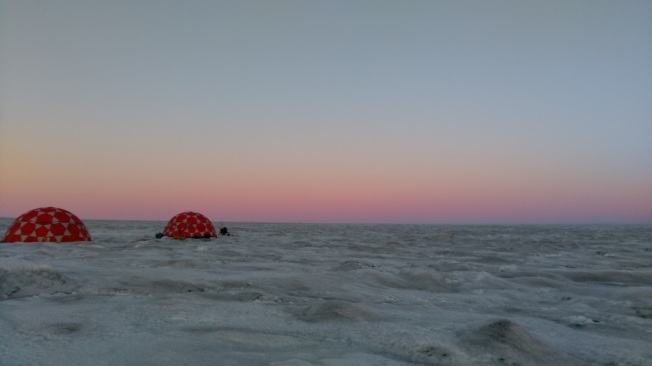 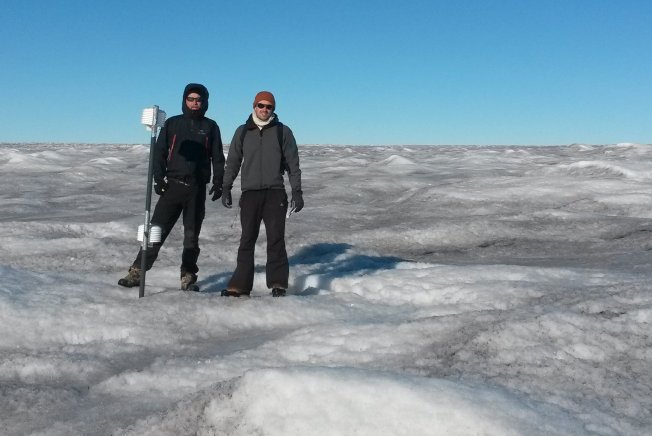 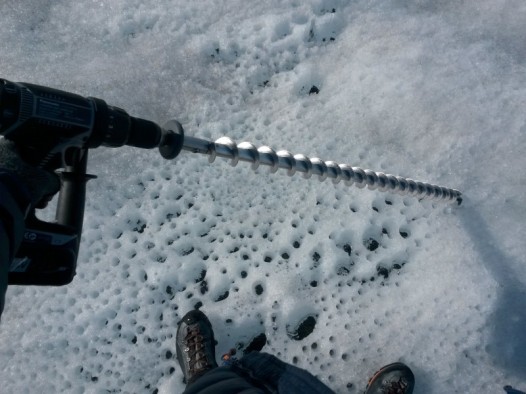 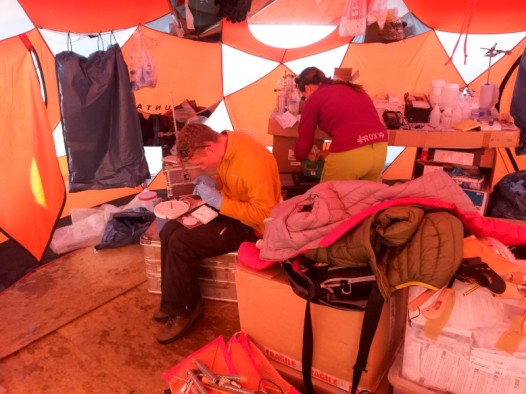 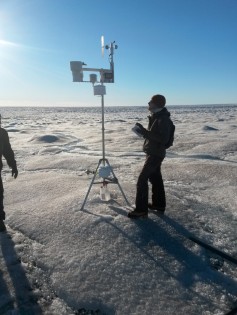 The put-in team loaded around 2 tonnes of cargo into the Air Greenland S61 (it actually took two flights because we have so much stuff). We even took out 25 sheets of 4’ x 8’ plywood and pallets which provide solid flooring and very useful outside storage platforms respectively. The passengers sit at the back behind the cargo. Also, a couple of the pallets provide a screen for the somewhat rudimentary toilet facility we have on the ice sheet.

The camp itself comprises 2 large tents and individual tents for each person; experience shows that a little private space makes for a happier team. We are blessed with some pretty impressive views from the dinner table. One of the large tents is the ‘mess’ tent used as a general kitchen/dining/office space, pots tend to be washed al fresco. Pitching tents involves a Kovacs drill and lengths of bamboo replacing the traditional tent peg, although the occasional ice screw has also been spotted to bolster the bamboo poles as they begin to melt out.

Due to the continuous melting of the ice around the tents, we have to repitch them every few days. It is quite a bizarre to see the mound of ice left after the tents have been moved (the surrounding ice melts around the tent).

We are ‘upstream’ of the Dark Snow camp to provide us with a fresh location for our experiments this year. We have setup ourselves up with a 500 x 500 ‘pixel’ a few hundred metres from the camp and this has been instrumented with a matrix of plastic ablation poles complete with a pair of temperature measurements (0 and 1 metre above the surface). The size of the pixel has been selected so that it provides  and exceeds the spatial resolution of satellite measurements.

These are visited daily and the height above the surface of the sensors is measured to determine the melt rate across the pixel. Over 1500 individual spot heights have also been measured so that we can generate a DEM (digital elevation model) of the pixel itself. Four of the ablation poles in an inner ‘circle’ also have upward and downward facing pyranometer to measure the incoming solar radiation as well as what is reflected back up from the surface. Finally in the centre of the pixel is the weather station (temperature, relative humidity, winds, rain gauge & another set of pyranometers). Numerous other observations and samples are collected across the pixel, these include spectral reflectance measurements, ice surface photography and UAV overflights. One-metre ice cores are being drilled and sectioned for density measurements and to provide context for the spectral reflectance measurements. Ice biology is being studied so many samples are also being collected and analysed for photophyisology, productivity, pigmentation and genomics, you could say a census of the biology present in our pixel, the “who, where, what!”. The contribution of transported particulate material is being assessed through in-situ aerosol measurements of both black carbon and other airborne aerosols which can be deposited to the surface providing a perturbation to the albedo as well as contributing to the ‘nutrient mix’ available to the algal and bacterial life.

After two weeks, the happy band of the ‘put-in’ team ended their stint on the ice together. Liane, Steffi and Jenine were to fly in to replace Tris and Tom whose time was up, Tris was to head off to Svalbard for a two week field school whilst Tom had to make the rapid transition to a sunshine holiday in Corfu! However, the law of fieldwork (our version of Murphy’s law) came to pass and the helicopter was redeployed for search and rescue which meant another night on the ice for Tris and Tom.

The team change happened yesterday and all report being happy on the ice last night. More of the dash to the snow tomorrow.

Image credits go to Jim and Tris – big thanks both.